The new organization is totally team based, with only three levels instead of eight, and structured around four business units, each consisting of a set of production teams. Magma's idea of making teams into small enterprise units appears to be very similar to the "small business teams" (SBTS) that Klein describes elsewhere in this volume. The entire operation is managed by an "Executive Council" composed of business unit team leaders, technical support specialists, and union representation (see Figure 2). The Council reports to the President. Union representation is also a formal part of each work team. Magma Metals invented on its own what Bluestone and Bluestone (1992) subsequently call a way of moving from "co-managing the workplace to co- managing the enterprise" (Ch. 8) in the form of an "enterprise compact." 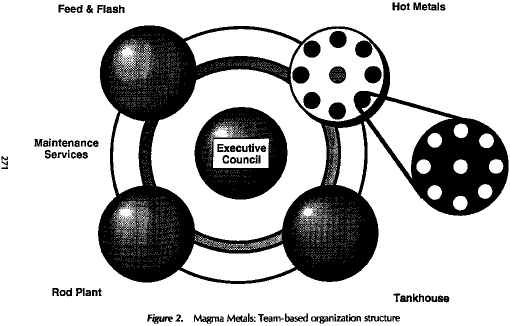 Another innovative aspect of the Magma Metals design is how it was implemented. Each work group became designated as a team by their action in applying for 'certification." The design has produced new work assignments and work groups but the work groups, have to produce themselves as teams. As the President of Magma Metals reports (Champaign, personal communication, 1993), each work group must be certified that it has met six requirements (see Table 1) to be designated as a team and allowed to begin formal training that includes business, financial, work, and breakthrough thinking skills. Each team is responsible for its own training, production, scheduling, safety, budgets, and supply. The plant's design is a text book example of the newest thinking in STS.

Although the design is still only in the early stages of implementation, the first year of operation has produced significant successes. Champaign (personal communication, 1993) reports that even though all 1,000 employees participated in extensive training. They still set production and unit cost records and generated record cash flow of $80 million in 1992. Virtually all operating cash flow generated in excess of budget can be attributed to reductions in operating costs below budget and production above budget. In addition, inventories and accounts receivable were lowered by more than $30 million.

The third main perspective that the consulting team brought was the idea of strategic development. The approach emphasizes linking strategic planning (especially the idea of "strategic intent," Harnel & Prahalad, 1989) with conventional organization development. The team was particularly oriented around change projects that had a clear business purpose and could be related to Magma's long term strategy.

These three perspectives were not the only ones present during Magma's period of transformation. Nor should they be seen in isolation. "Breakthrough projects," for example, always were linked to company strategy and had a clear bottom line payoff. There was also conventional supervisor training provided by an internationally known training company, and other training and development efforts, for example, these related to mine safety.

Finally the Magma transformation needs to be understood over time. It started with a crisis meeting of leaders from top management and unions in Scottsdale in October, 1989. Although a complete history is not possible here, key events included the creation of the Joint Union-Management Cooperation Committee (JUMCC) as a direct result of the Scottsdale meeting. The JUMCC has played a central role, and simply creating it, given Magma's history of labor- management conflict, was itself at that time a major breakthrough. The idea was that the unions and the company would form a "strategic partnership" which would be reflected in cooperative labor-management relations at all levels and in all areas of the company.

This led in the next year to a series of two day workshops at the Sunspace Conference Center for the 800 or so supervisors and union shop stewards where everyone got training in breakthrough thinking. According to many accounts, major breakthroughs occurred in relations between supervisors and their union counterparts-many of these pairs were hardly on speaking terms prior to Sunspace. Afterwards many of these former enemies joined together in some form of participation in a breakthrough project. The most important result of Sunspace was to lay the groundwork for breakthrough projects, especially in work redesign and then the "breakthrough" labor contract.

The breakthrough that has perhaps attracted the most attention to Magma was the contract signed with the unions in 1991. If any event would not have been predicted on the basis of Magma's history (and the history of union- management in the southern Arizona mining industry in general!) it was this agreement. It went beyond other labor management agreements. One of its most immediately tangible benefits for the workforce was to ratify a gain sharing arrangement that a joint union-management task force had designed. As a result of productivity increases for most of the last several years, Magma miners have been among the highest paid copper miners in the world.

In short, by all measures, Magma has undergone and is sustaining a process of radical organizational change that illustrates organizational transformation, not just organizational development. The question is how to explain this process in operational terms, in terms of a practice theory. In the summer of 1992 Magma commissioned a study to explore this question, but researching transformation turned out to present special problems.