Magma-A : Part I by: Max Elden

A Case of Ongoing Organizational Transformation

In 1989 Magma Copper, one of the largest copper mining operations in North America (with about 4,000 employees) with one of the most advanced smelting plants in the world was up against the wall. Its operating costs were high, it was $400,000,000 in debt, and it was in the midst of another of a series of life and death struggles with its unions. This time the labor contract negotiations were particularly bitter and violent. Shots were fired in the night. A building connected with plant security was dynamited. Labor strife was on the verge of killing the company.

Only two years later, in 1991, Magma and its unions signed what Fortune termed a "revolutionary" 15-year contract with a seven-year no strike clause, gain sharing, and extensive union-management cooperation in running the business, and business results were impressive. The Magma story was featured in the business press including articles in Fortune, Wall Street Journal and Business Week. In terms of hard, "bottom line" numbers, Magma's debt and its operating costs are significantly reduced, productivity is impressively increased, safety is improved to award winning levels, and grievances and absenteeism are down dramatically. Magma's stock, first offered on the NYSE in December of 1991 doubled in early 1992. By early 1993, costs had been reduced to levels not thought possible only a few years before, and new capital became available for significantly expanding mining operations. All these hard indicators of a turnaround and specific operational breakthroughs have been sustained for more than three years.

In pure business terms the most impressive bottom line results are featured in Magma's most recent annual report which reports as its very first point on dramatic productivity increases (up 61% since 1988) and cost decreases (see Figure 1). According to Magma's 1992Annual Report this improved operating performance has "...been largely driven by the use of innovative technology and planning, and the implementation of employee involvement and gainsharing programs" (p. 2). Significantly, Magma's financial position has been substantially improved. Magma's credit rating now provides access to capital markets that has led to hundreds of millions of dollars in new capital. Financial analysts and the stock market evaluate Magma as much more economically viable today than in 1989. 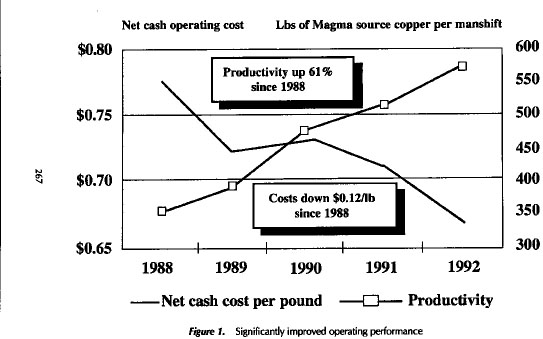 What is happening at Magma is no accident or lucky breaks, or simply a matter of good intentions, or following some prepackaged recipe. Magma started transforming itself on the basis of several well known theories and continues to use consultants and researchers. But from the beginning, Magma management and union leaders took charge of their own change process.

Chief among the ideas the initial consulting team brought to Magma was a set of concepts and ways of working that had produced fundamental change in other organizations. As developed and practiced by the consulting firm this methodology for transformation provided a metalanguage for creating possibilities for action outside of what would be predicted based on historical trends and existing ways of working (see technical notes by Broussard, 1991; Mueller & Turner, 199 1; and Turner, Ramsey, & Mueller, 1992). Called "transformational technology," this approach helped people breakthrough the boundaries of their current mental models, envision a new future not considered possible in the old mental model, and begin to enact the future they now saw. This approach to transformation overlaps in part with the emerging definition of transformation in the change literature (compare Porras & Silver, 1991, pp. 70-73) in such areas as vision and individual consciousness change (as refraining rather than "consciousness raising'). However, it also departs significantly from Porras and Silver in aiming at a "practice theory" based on insights from linguistics and ontology, rather than psychology. Exploring these differences exceeds the limits of the present inquiry.

Using this approach to develop transformation in practice has required substantial training at Magma (approximately $20 million over the last 4 years, or 3.5 percent of payroll which translates to an average of 4 to 5 days of training per employee annually). But the critical element which should be the basis for benchmarking is not the impressive amount, but the innovative content of the training. From the perspective of promoting transformation, what is required are new ways of thinking and talking about "possibility"-a word that quickly took on new meaning at Magma. For example, to help people understand about paradigms and mental models, a simple, five minute training video, "Joshua in the Box," was shown which graphically illustrated how some sort of framework ("box') is always present. A frame of reference is an essential element in the ability to make sense out of the stimuli one's senses register. The point of the video is that one's initial frame of reference is not the only possible one. One needs to be able to think in multiple frames. New thinking in organization and management theory makes a similar point about effectiveness depending on ones ability to think in multiple frames of reference (Bolman & Deal, 1991; Quinn, 1989; Morgan, 1986).

People at Magma got the message: to see possibility one has to be willing to step outside of one's box. Being willing to look at things, new ideas, proposals for action "outside of your box," has become a common phrase at Magma. Another well known training exercise requiring people to link nine dots arrayed in the form of a square by using only straight lines and not lifting the pencil from the paper made the same point. The only possible solution requires refraining the context so that one uses the space outside the dots. "Operating outside the 9 dots" became another popular saying among those involved in changing things at Magma.

This kind of training in a metalanguage for change enriched and extended what ordinary people could talk about and do at Magma. It contributed to legitimizing thinking in new ways, taking risk, and innovation by recognizing, initially in the language, a new space of possibility. Free space for individual initiative always exists in organizations in the gap between what is prescribed and what is proscribed. The problem is that organizational norms and ways of thinking do not allow people to capitalize on their own ideas about what is possible to improve in operations about which they have detailed, practical expertise but not the authority for change. Training that inculcates a meta- language for change in terms of "possibility thinking" seems to be important in what happened at Magma. When someone started to close down possibility, the challenge would come to "get out of the box."

The Magma approach to transformational or "breakthrough" thinking is a way of creating distinctions in language that help people envision an idealized future and get into effective action to bring this future into being. Getting into action often takes the form of "breakthrough projects." These have been found to be highly effective and productive in a variety of settings (e.g., Scherr, 1989). A breakthrough project starts with someone's vision of a new possibility that is outside of their box-that is larger than they thought could be achieved. They nevertheless take a stand to bring the possibility they see into being. Without the language and concepts there would be no possibility to think in new ways: the future people could envision would not occur with the context of existing ways of doing things. In Weick's (1979) terms, people at Magma are enacting a very different future than anyone would have predicted in 1988. This experience of success in enacting a new future supports further efforts to continue such invention-based activity. By taking a stand and enrolling others, one has a point of departure. Getting into action requires doing things outside of the existing set of roles, tasks, and procedures. This is legitimized by getting all relevant stake holders aligned and agreement from relevant authority ("requests" and "promises?). At Magma people say they are standing in the future as a basis for acting in the present. Following Weick's concept, breakthrough projects are a way of enacting a new future (one that makes good business sense, too!).

Magma has experience with literally hundreds of breakthrough projects in all aspects of the business. Some are sanctioned by management; others by labor and management cooperatively. The projects cover the gamut, such as cost reductions, new accounting methods, work restructuring, and quality improvements. In one way, all change efforts could be seen as based on breakthrough thinking even those, such as management training and organizational restructuring, that were quite major projects originating from other approaches to change.

One of these approaches, sociotechnical systems (STS) thinking and autonomy, or self-managing team based organization design, was the second main theoretical perspective the consulting team brought to Magma (for the most up to date description of STS ideas, methods, and history written by some of its originators see Trist, 1981; Trist & Ketchum, 1992; and Taylor & Felten, 1993). This approach would place decision making competence and authority as close to the problem as possible so that those involved and having the most information are also those who solve it. The main principle is to design organizations and their components as self-regulating systems. This usually leads to organization design based on alternatives to hierarchy (organization based on networks, clusters, teams, projects, linking pins, etc.).

These ideas have also been used at Magma in a variety of large scale organization redesign projects in both mining and in smelting-refining. While neither STS methods of organizational analysis and design nor the idea of self- managing teams is new, they were taken seriously at Magma, and in the context of transformation, produced some striking results. Nowhere is this more evident than in Magma's smelting-refining operation which was spun off as a wholly owned subsidiary in January, 1992. Technologically, this operation is on a world class level. Not much productivity improvement could be expected from further technological investment.

Even before the new subsidiary was formally established, a union- management cooperative effort was exploring possibilities for a radically new way of organizing the operation. It was a conventionally structured, functionally based, eight-level hierarchy with about a 1,000 employees. The 64vertical slice" union-management design team consciously took on the challenge of "possibility thinking" as far "outside of the 9 dots" as possible in considering alternative organization design possibilities. Although they did not formally use the language and methods of "re-engineering" (Hammer & Champy, 1993), they treated their organization as a new plant start-up and thought through everything from the ground up. The results were striking.